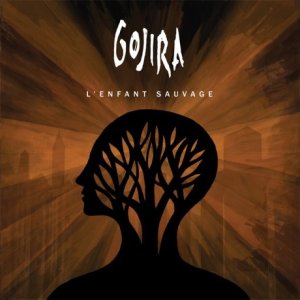 Finally, the wait is over! French metal titans Gojira have returned after a 4-year wait with their massively anticipated fifth studio album ‘L’Enfant Sauvage’. Released on Roadrunner Records the album is Gojira’s major label debut, so expectations were running high. They do not disappoint!

Recorded in Long Island City, NY with Josh Wilbur who is known for his work with Lamb Of God, this is a record of immense power and serious attitude while all the time exhibiting the trademark groove and catchiness of the previous 4 albums all bound by the haunting atmospherics and magnificent grace and finesse that Gojira have become so well known for.

Opener ‘Explosia’ dives straight into classic Gojira territory, opening with a massive rolling pick slide / harmonic style riff backed by thunderous rolling double kick drums that give you little option but to bang your head half-way-off a mere 30 seconds into proceedings. Title track ‘L’Enfant Sauvage’ is up next and really gives us all a very clear picture as to why Gojira have become one of the most exciting and inventive extreme metal bands on the planet. From open to close L’Enfant Sauvage delivers extremity and elegance in equal measures bound by the complex polyrhythmic drumming of Mario Duplantier, catchy groove laden guitar riffs and the very distinct vocal style of Joe Duplantier. Everything is just so cohesive and natural. There is no filler, no unnecessary interludes and no distracting electronic samples or extra post-production meddling.

The most noticeable thing about this new album is its running time. On previous releases, the band had a tendency to over extend the content but ‘L’Enfant Sauvage’ is a noticeable 10 minutes or so shorter than the usual outing which makes for a much more compact and captivating experience which simply begs to be replayed every time the album reaches the final distorted feedback of The Fall.

Other stand out tracks on the album include ‘The Axe’, ‘Planned Obsolescence’ and ‘The Gift Of Guilt’ but to be honest there isn’t a weak moment during the entire 52 minutes. It’s the album that we all hoped Gojira would deliver and it’s the album that has now 100% cemented Gojia’s place as one of the most exciting and forward thinking metal bands of our time.