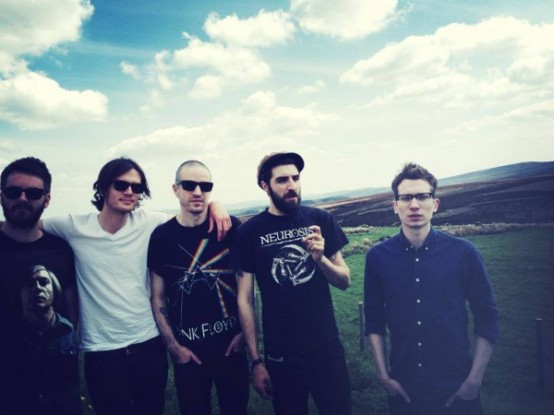 Here at Eyesore Merch, it’s no secret that we’re big fans of Bossk, and are happy to be able to sell their varied merch exclusively in the UK. After reuniting and doing a UK tour with Dragged Into Sunlight last year and releasing the fast-selling Pick Up Artist/Albatross 7″, it’s safe to say that Bossk are rolling stronger than ever. If you’re as curious about the backstory for this comeback as we are, and what’s to come, then read on. Don’t forget to check out their merch here.

First of all, would you like to introduce yourself and what you do in Bossk?

How did Bossk come into formation?

Was the merging of two friendship groups that had all been in local bands together. Coming together to make music that wasn’t like any of the bands that we had done before. We have all known each other for over ten years now. A lot of pot was smoked, a lot of riffs forgotten, but we spent some serious time in each other’s company.

What was the reason that you guys decided to take a break from Bossk in 2008? It seemed like every band on Eyesofsound was doing great especially with the likes of Devil Sold His Soul, Palehorse, Humanfly and Rinoa. It seemed totally out of the blue at the time.

It was a build of things really, not everyone was happy with the new lineup, and jobs, lack of money from touring so hard takes its toll on people after a few years. Watching some of the bands that we played with back in 2005-2008 are some of the best memories that any of us have together.

Now you guys are back, your fanbase seems stronger than ever and you’ve managed to sign up with Jacob Bannon’s (of Converge) label Deathwish Inc. How do you feel about that and how did the deal with Deathwish Inc. happen?

I have worked with Converge on several of their European tours doing merch and have developed a good friendship with Jake through that. They do things right, and I was asking Jake for advice on what direction to take Bossk in once we had reformed. We share similar principles of the music industry and what is actually important and relevant to the artists making and touring music they have spent months, sometimes years writing. Our fans are the best, we never anticipated the level of support we have had since announcing our first shows back, every show we have done has surpassed our expectations.

What was the recording process like for the Pick Up Artist/Albatross 7” and getting Daniel P Carter to do the artwork for it?

We recorded PUA with our good friends Phil Gornell and Lee Malia up in Sheffield, and Albatross in Kent with [a] friend, Martin Ruffin. Both tracks were recorded completely differently, but fit what we wanted each track to sound like. We hadn’t recorded together in a very long time, and was actually a lot of fun! Dan has become a good friend of mine, and I am a big fan of his work. His involvement in the BBC session we did made it feel right that he was involved in the art for this release.

Bossk are pretty well known as a band with its feet in the post-rock/post-metal genre, taking things slow and soft and then smashing in with big riffs and roars, as well as having only seven tracks to your discography (including the cover of Fleetwood Mac’s Albatross). Is this a conscious thing with the considerably short number of songs? Do you think that there’s an overabundance with releases each year with certain artists?

Not really, we wrote PUA as a stand alone track, not part of a collection of tracks, originally just to use as a free download on our website. We have always just tried to write music that was different to our last, but still retaining our own sound. I think that how we are writing music now is very different to how we wrote back in 2006-2007, we are currently demoing the whole album, which we have never done before, so that process is making how we write much faster.

You’re a band that’s quite well connected with others and you seem quite supportive of others, but who at the moment do you see as the bands or artists that you’re especially digging right now?

We always believed that no one gets anywhere without help from others, and that we have always tried to support other bands. For me I am really into a band called Canterbury, and been listening to lots of Crosses, Chino’s new project. I also recently rediscovered my love for Mogwai, and have been listening to their new album on repeat.

Bossk are playing Temples Festival this year, a new festival in Bristol that’s sporting an insane line-up for extreme metal and punk. How do you feel to be playing it and who are you looking forward to seeing there?

Honestly, as soon as I saw that bill coming together I really wanted Bossk to be part of it. Independent festivals that can have a lineup that impressive is worth supporting. The promoters for Temples, and for Damnation Festival, are some of the hardest working folk in the promoting world. It’s truly an honour to share a stage with Neurosis, pioneers of a sound that has continued to grow and evolve over the years.

Bossk has been known to do some unusual merch, with the rolling rest, hemp soap and soon the Bossk BBQ sauce. What’s the usual process in coming up with these sorts of merch? Is it hard to make these products?

Anyone can print t-shirts, we are trying to push ourselves to create music that goes beyond people’s expectations, and we just apply that to all aspects of the band. We made a lot of that stuff ourselves, or through small businesses based in the UK.

What can we expect from Bossk in the future in terms of future releases and tours?

You can expect all of those things. We are finishing demoing the album and have a bunch of shows announced for later in the year, ranging from Paris to Moscow, and a ton of other places we have never been. These will be our biggest run of shows for a while though while we finish the record.

The Bossk Pick Up Artist/Albatross is still available on Deathwish Inc, and be sure to keep up to date on all tour and news updates via Bossk’s official website.

1 thought on “Bossk Interview: “Our fans are the best, we never anticipated the level of support.””