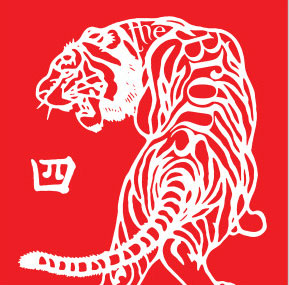 Finally, after a long wait for a new The Bronx album (as good as their Mariachi project is, well… we need more of The Bronx!), their fourth release comes to light five years after their previous self-titled effort. The quintet are made up by energetic vocalist Matt Caughthran, guitarists Joby J. Ford and Ken Horne, bassist Brad Magers and drummer Jorma Vik.

They originally started off as a hardcore punk band, with more emphasise on the punk part, but over time the guys have slowly moved away from the aggressive sound of their first two releases. This release sees another leap in the change of their style, not moving more towards punk, but past it, and further into straight forward rock’n’roll.

This is undeniably the catchiest and most accessible the band has ever sounded, but it’s far from a bad thing at all: they pull it off! Matt’s raspy vocals suit the style just as much as his mixture of screams and singing suited the punk style of their previous albums, and his focus on clean vocals here is nothing short of charming.

The album opens with The Unholy Hand at fast pace and the opening lyrics instantly grab your attention “They’ve got you working on the weekdays / They’ve got you working on the weekends too / I know you’re swallowing your paycheck / Like it’s what you always dreamed you’d do”. The instrumentation and structure of the song is pretty straightfoward, and this attribute rings through the following tracks for the most part of the album, but not in the predictably tiresome way.

Along For The Ride has an upbeat jittery riff and Matt sounds lighter, almost as if smooth-coating the overall sound. The chorus is just ridiculously catchy and unforgettable – something you could easily imagine as a soundtrack to a Jackass film trailer, or cruising along to in your car during the summer. Style Over Everything is perhaps the first track that doesn’t strike as a stand-out track despite having a fairly big sound for The Bronx, it just never really goes anywhere, despite being moderately enjoyable.

The fourth track Youth Wasted has a bit of a punk twang to it but stays so light, and with lyrics like “Youth is not wasted on the young”, it has a happy reminiscent feel to it. Too Many Devils sounds like The Bronx unifying the styles of Floor and Jucifer with it’s guitar and drumming, respectively. Again, the chorus is just very catchy. And then Pilot Light changes the pace, slowing it down slightly with it’s stomping verses, and is way catchier than the chorus, almost majestic and obnoxious in its own way that you can’t imagine Matt doing anything else but pulling some Freddy Mercury moves during it.

Dare it be said, seventh track Torches sounds incredibly Weezer-ish at parts due to its pop-sensibility, and while this might make long-term fans want to snort in disgust… well, The Bronx make it sound really good! The lead guitar with its semi-clean arpeggio and the bursting chorus really sounds like it’s The Bronx’s very own My Name Is Jonas.

Unfortunately, the following track is slightly forgettable as Under The Rabbit doesn’t really bring anything to the table, and feels a bit of a rehash of what you hear in some of the previous tracks. Ribcage is another track that has a slight punk feel to it, instrumentally and lyrically, but again feels so light-hearted that it doesn’t have you feeling like starting a riot but thinking about your best summer.

Valley Heat, while again covering the same ground as a few previous tracks, just has this infectious melody that sounds like a sped-up Sweet Child O’ Mine during the verses, without the sleaze. But then you’re given the only downright morose track on the album, Life Less Ordinary, and as odd as it may sound, is really refreshing at this point in the album. The sobering introspective lyrics “I’m not ashamed to say I’ve lost my mind /Been walking backwards my whole life / Some might say there’s a price I pay /For a life less ordinary” grab your full attention with raw beauty. Plus the coughs and low hums that you hear makes the track feel pure and authentic.

Following with the closer Last Revelation, with its up-beat instrumentation, feels slightly disjointed at first considering the nature of the previous track, but you soon forget about it with its carefree attitude and chorus-focused style.

While “IV” might edge close to being overly repetitive at times, it’s near impossible to feel cheated or claustrophobic, as such is the case with bands that fall into the habit of repetition. Considering most tracks on this album rarely reach the 3-minute mark either, you find yourself putting some songs on over and over again for that particular chorus or verse, as the album just flies by when you’re subjected to so many catchy moments with this.

As the aggression that seethed within The Bronx during their earlier releases shrinks further and further away, this is an equally enjoyable album to those efforts. Yes, the spiteful angst is something that made those albums great and addictive, but there’s no reason a long-term fan should find this hard to sit through. Plus if the band is as happy as the music suggests, then it seems like they’re not leaving us any time soon, and that’s something to take comfort in.

7.9/10
Favourite tracks: Life Less Ordinary, Torches, Along For The Ride.