The 3rd post in our series of classic horror movie worship by our pal Gavin A Go Go. This is House On Haunted Hill. Released in 1959.

I thought as I mentioned William Castel in my review of The Screaming Skull that it would be fitting to do another of his films and what better than The House On Haunted Hill staring the brilliant Vincent Price.

Eccentric millionaire Frederick Loren (Price) invites five apparent strangers to a haunted house for a “ghost party” (not too sure what that is, but I really want to go to one) for his wife. Each of the guests have been informed they will receive ten thousand dollars in return for their attendance. They each arrive by funeral cars and at this point Loren narrates the reasons for them attending (they desperately need the money mainly). One of the guests, Watson Pritchard is also the owner of the house. He inherited it from his brother, who was murdered (along with several others) at said house. Watson had stayed in the house once before and claims that he only just survived, but doesn’t go into much detail of his ordeal. 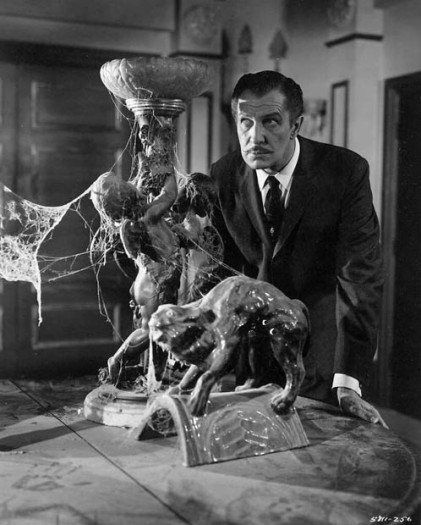 As soon as they arrive at the mansion, strange things start to happen. A door slams, a chandelier swings and falls, narrowly missing young Nora Manning. One of the guests who works for one of Loren’s company’s and needs the money as she is the sole earner for her family.

After the guests have calmed down with a drink, the host finally makes an appearance and goes into more detail about the evenings events. They soon learn that in order to claim their ten grand they are required to be locked in overnight with no chance of leaving until 8am the next day. Each have until midnight to make their decision. While all of this is going on Pritchard is telling everyone how unsafe the house is, the ghosts have been awoken and that everyone should leave immediately. It becomes apparent that the man likes his booze, so very little notice is taken. 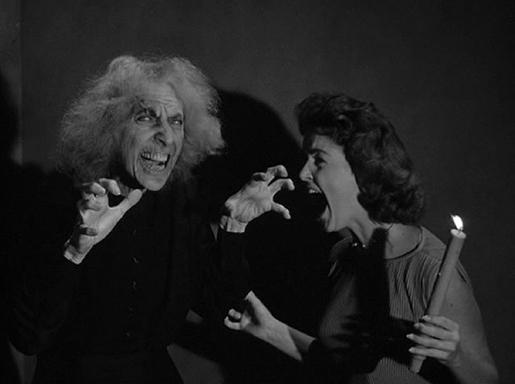 The strangers take a tour lead by Pritchard, as he is familiar with the house and it’s history. He shows the locations of where the murders took place and the grizzly stories behind them. The group is lead to the cellar where they are shown a trap door. The lid is lifted and a vat of acid is revealed. We are told that this is where one of the murders took place.
(The acid seems to dissolve only the flesh leaving the bones and we are given a demonstration of this by use of a dead rat ha ha ha)

As Midnight approaches more and more strange things happen, particularly to Nora, who pretty much gets the brunt of it. Miss Manning is determined that she is going to leave, but before she has a chance…. its too late! The care takers have left and locked up 5 minutes early. There is no way out and with no electricity or phones, communication with the outside world is futile.

Once the party goers have come to terms with the situation, Loren thinks this would be a good time to hand out guns to everyone awesomely presented in tiny coffins. (I want one). This just raises tension and doesn’t bode well for the rest of the evening.

This is how early black and white low budget horrors should be made. Great story, high camp factor and perfect cast. Right from the get-go you pretty much know what you are in for and it doesn’t stop. It’s a great story, very original at the time, totally engrossing and a lot of fun. It has some pretty good jump moments too. My personal favourite being the first time we are introduced to the female care taker (You’ll see).

1999 produced a re-make of this classic and although it was thrown in with the post Scream MTV horror overload such as the likes of Urban Legend, I Know What You Did Last Summer and 13 Ghosts (another Castle re-make), it wasn’t that bad.

I really wish I could have seen this at the pictures when it was first released. William Castle is well known for his great in theatre promotional gimmicks, such as under seat buzzers for The Tingler and had (fake) nurses in the lobby checking peoples blood pressure to make sure they were well enough to watch the features. For this one he used Emergo, where he installed an elaborate pulley system in the theatre which allowed a plastic skeleton to be flown over the audience at the right time. It would have been a blast. The film Matinee staring John Goodman is based on Castle’s career and well worth checking out too.

This House On Haunted Hill T-Shirt really nails the awesome camp factor from the film and some of the classic moments from the film, even the trap door of acid. 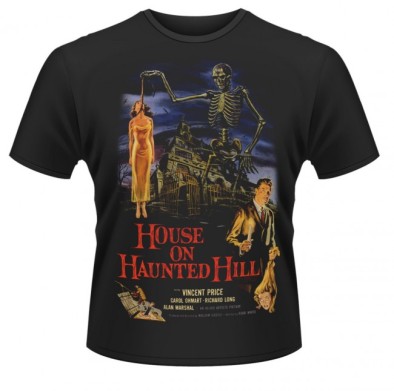